Austin Festivals and Events for October 2011

Austin Events October - There's a lot in Austin, Texas to celebrate in October. The days are still warm, the nights cool, and the weekends packed.

Celebrating Halloween in downtown Austin is always interesting. There are also other Halloween-centric events such as the Ghoulwill Ball, the House of Torment, and numerous other Halloween resouces and parties listed on the Real Austin Texas Halloween Austin 2011 page.

And for a comprehensive list of upcoming events (including special, non-recurring events), check out the Austin Event Calendar. 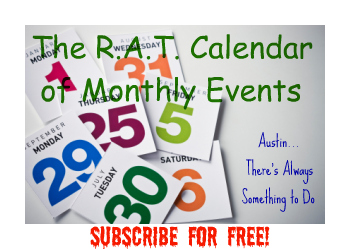 Subscribe to the free R.A.T. Calendar and receive an updated calendar of events delivered to your email inbox each month compliments of Real Austin Texas.

Perfect for locals, visitors planning their next trip, and nostalgic Austin expatriates everywhere, the updated R.A.T. Calendar is delivered the 3rd Monday of each month.

Enter your email below to begin receiving the free monthly R.A.T. Calendar delivered to your inbox on the third Monday of each month. Your email address will never be sold, rented, traded, bartered, gambled with, used as collateral, exchanged for shiny objects, or in any other way abused, misused, or compromised. I will only use it to send you official R.A.T. Calendar notifications, and you may unsubscribe at any time.